OWNING YOUR UNCOOL: THE SERIES- WHAT’S IT ALL ABOUT?

Recommended Reading Soundtrack:  Love Won’t Let You Down By Ben Lee featuring Sally Seltmann on A Mixtape from Ben Lee (Click on track 11, you won’t be disappointed!)

In September of 2013 I wrote a blog post in response to a weekly writing challenge about “Owning Your Uncool” rooted in one of my favorite quotes by the character Lester Bangs in Cameron Crowe’s brilliant film, Almost Famous. The quote has become a sort of compass for me in my life, and I find myself inspired by its meaning on a regular basis. Like a ritual, “owning my uncool” is something that I do in order to remain humble, compassionate and engaged with others and myself as we experience our process of living and existing in a confusing ego-driven world. 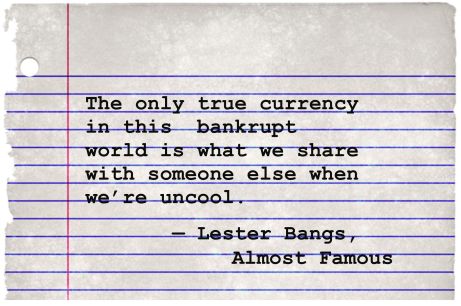 Lester Bangs’ quote was a response to a rock bottom moment in Almost Famous when the lead character, William, was hit with a tremendous case of self-doubt. His experience taught him that the great music legends he worshiped had a flip side, a culture behind it that was manipulative and egotistical. In other words, he was outliving his naivety and getting acquainted with the dualistic humanity that potentially exists within all of us.

I am excited and inspired to be opening this series with a special “owning your uncool” moment from Aussie musician extraordinaire Ben Lee. As the readers of my blog know, and to the new readers out there- music is an important part of my own journey as a writer and artist. Just one song can change everything!  Ben Lee has been one of those inspirational artists to me in my own life, so being able to feature him in the opening of this series is basically AWESOME.

A little ditty about Ben Lee, from me.

His music is honest and a constantly evolving reflection of his heart. Breathing Tornadoes was one of those albums that I could listen to over and over again. When I moved a world away from Washington, DC to Santa Fe, NM, I was caught up in the moment of learning how to be true to myself in a foreign social landscape. And yet, Breathing Tornadoes seems like light years away from his newest music.  His 2015 tour is in full swing with the release of his newest album, Love Is the Great Rebellion. Australian Stage Tix calls his music “upbeat, heart-on-sleeve pop.”

Being true to yourself in a wacky world full of expectations and projections can quickly become a challenge to simply not get sucked into the black hole of “who you’re supposed to be.” In anything we do, putting yourself out there takes courage because there will always be those that make their living through criticizing. With that said, below is Ben Lee’s answer to a question that is about showing the world we are all human and struggle. We don’t have to be alone in our struggles- even the most successful people have had their fair share of feeling insecure and realizing that their perception of the world was not necessarily the truth.

Me: Can you tell my readers about a time in your life, where you felt that same “uncool” and isolation inside as the character in Almost Famous, and how you used that moment to propel yourself forward in your life?

Lee: I remember being 14 and getting a stack of bad reviews from the English press sent to me by my label. They thought I would find it funny, but being 14, and having not yet developed any kind of thick skin, I was quite devastated. I was shocked. I couldn’t believe the brutality of them. The teasing. The resentment. I had never been exposed to that degree of vehemence. It knocked the wind out of me.

Later, after processing the unexpected loss of innocence I knew what I had to do. I cut each of the reviews up, made a collage of them, and included them in the artwork for the first Noise Addict album. It was an act of alchemy. I suddenly took control of the situation and wore the ridicule that I had been subjected to with an effortless act of defiance and pride.

Obviously, this was a temporary solution. There have been deeper levels at which I, like every other artist, have needed to confront my own need for validation, fame and success. I have had to systematically tear down these false idols, and continue down the path of artistry towards my ultimate goal. But in that moment, I did something important. I stood up and said “I won’t hide, and you won’t win”. And that was the beginning of my understanding of true success.

Me:  Thanks Ben!  Your authenticity rocks, I am grateful for the role your creative endeavors have played in my life.  I hope that everyone reading your response will take away something inspiring, and make the personal decision to also not hide their light out of fear of the critics.

I once heard you say that “the process is the actual award.”  There are times when we might feel like Winona Ryder’s character in Reality Bites as she slowly sinks into the bell jar with every move we make to better a situation.  But we can shift that moment with a new perception rooted in “Love as the Great Rebellion.”  When we’re in it, it’s hard to see outside of our foggy glasses of self doubt.  Let’s Rock Big Love!

You can check out more about Lee’s music at his website, http://www.ben-lee.com, or on his Facebook page.