A Childhood Lesson on Life’s Fragility

Thank you Weekly Writing Challenge for drawing out from me another memory that framed the truth of perception for me.

A memory that really affected my perception of the world and its profound fragility came from a car accident I experienced in 4th grade.  It is weird how when you think about one memory, all of a sudden another memory pops up.  Our mind is like a tree, branching out.  One branch growing into another, so subtle and fluid.  Fourth grade was one of those years that really stood out for me with change.  The accident took place right after Christmas.  Me and my brothers were corralled into our family’s little white Toyota Tercel by my Mom to take a trip to the local mall in an effort to exchange some things.  It was a cloudy day and the roads were slick with drizzle from the winter sky.  It was the early 80s- no one had their seat belts on.

We lived in the woods of Virginia, so we traveled a lot on these curvy “back roads” as we called them with deep shoulders and no lines.  As we took one of those curves our car hit the shoulder on my side of the car, me in the passenger front seat and my 2 younger brothers in the back. As we hit the shoulder, I grabbed for the dashboard.  It was a futile effort to control a car that now had its own mission.

The only recollection I have “during” the accident was when my face planted into the very dashboard I reached for moments earlier.  I do know that we flipped once, and as we began to flip a second time we hit a telephone pole or power line and this positioned us back on our wheels in someone’s front yard.  I remember my Mother being very scared and crying- hitting the horn repeatedly to get anyone’s attention.  Finally someone passed by, pulled over and was running from house to house to find a phone to call 911.  This was also before cell phones. 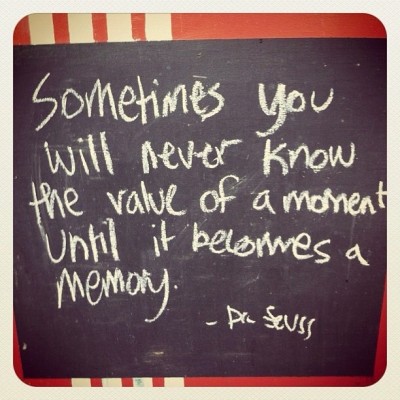 I remember waiting on the grass in this stranger’s front yard that we passed so many times  for the ambulance.  My brother’s face was bleeding, but mostly I just remember my Mother being overwhelmingly distraught.  There were 2 strong, emotionally charged memories from that experience that I still carry with me.  One was of a kind EMT- I remember him telling jokes to draw out laughter from me and my brothers.  I’m sure they were just as scared as I was.

The other most vivid memory from this ordeal took place at the hospital.  I remember being alone in my little curtained cubicle in the ER, and crying.  My mouth hurt because it had a very big cut behind my bottom lip that needed a lot of stitches.  But also, I felt a lot of stress from being in that accident.  It was kind of like what people experience with PTSD.  I remember someone came in to look at my mouth and placated my crying with a “oh, you’re fine- no big deal- we’ll stitch you up and you’ll be out of here.”  She even laughed at me.  It was awful, and I will never forget that person’s lack of knowledge about the psychological impact of a car accident on a child.  I couldn’t get that image of my Mother out of my head, panicking and crying and yelling for help.  Saying over and over again, “my babies,” with anxiety and fear.

Most children are not fully aware of a world that “lacks control” around that age.  They are just learning- and to see your parent in all their humanity, who you always note to be a leader, a solid foundation in your life- not solid and genuinely scared- is a huge learning experience and really affects your perception of the world.  You are learning that everything is not always the way you think it is and all you thought to be safe and secure can change in the blink of an eye.

When I watched the film, The Impossible, I was very taken aback by the scene where the oldest son sees his mother physically falling apart and realizes for the first time how serious it was, and he didn’t know how to handle it.  She had to refocus him and force him to keep moving or else they would die.  I know my memory is nowhere near as traumatic as this was to that young boy- but in essence, it was very similar and it really affected me watching it.  I only hope that other children who experience similar things will be helped with more kindness and compassion.  Our physical world is very limiting- we never know what someone is feeling deeply inside- we are each a planet unto ourselves.

This is perception and the fragility of our perceptions creates valuable lessons for all of us.  I only hope that we can all continue to remember how sensitive the ego of a child truly is, and their inability to describe where their emotions may be coming from makes their ordeal more traumatizing than it can be for an adult.  With a little TLC, we can make a huge impact on someone’s life without understanding what is going on in their heart or head.  It’s funny. I remember the one person that did care and tried to help me and my brother’s anxieties, as well as the one other person that did nothing.  I learned so much from both of them!